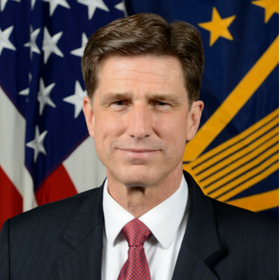 Mr. Dana Deasy is the Department of Defense Chief Information Officer (DoD CIO). He is the primary advisor to the Secretary of Defense for matters of information management, information technology, and information assurance, as well as non-intelligence space systems, critical satellite communications, navigation and timing programs, spectrum, and telecommunications.

Mr. Deasy previously held several private sector senior leadership positions, most recently as Global Chief Information Officer (CIO) of JPMorgan Chase. There, he was responsible for the firm’s technology systems and infrastructure across all of the firm’s businesses worldwide. Mr. Deasy managed a budget of more than $9 billion and over 40,000 technologists supporting JPMorgan Chase’s Retail, Wholesale and Asset Management businesses. He has more than 35 years of experience leading and delivering large scale IT strategies and projects, to include Chief Information Officer and Group Vice President at BP.