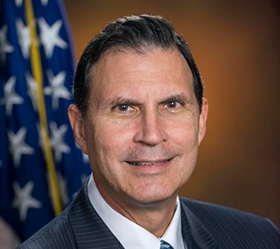 Mr. Klimavicz previously served as National Oceanic and Atmospheric Administration (NOAA) CIO and Director, High Performance Computing and Communications from January 2007 until May 2014. During this time, he also served as the Department of Commerce Senior Agency Official for Geospatial Information (SAOGI), and as the Senior Executive responsible for the Department’s use of the radio frequency spectrum.

Mr. Klimavicz’s 30-year career in the federal government began with the Central Intelligence Agency (CIA) as an imagery scientist, developing photogrammetric math models in the National Photographic Interpretation Center. He subsequently served in line management positions within the CIA and the Department of Defense (DOD) leading information technology programs. He also served as the National Geospatial-Intelligence Agency Deputy CIO, and as the DOD SAOGI.

Mr. Klimavicz lives in Virginia with his wife, Brenda and their three daughters.